As a child of the Sixties, I was intoxicated by the sound of the Beatles, Jimi Hendrix, Cream, The Who and so many others. A love affair for all things guitar took root, and I began playing the instrument in earnest by the end of college.

Since then, I’ve enjoyed playing my guitar around North America during travels, making new friends and music along the way.

I began performing live in the latter part of the Nineties, and today I lead a local five-piece blues band, the Bluez Express. We all met working at Walt Disney Imagineering, where they fostered an internal music program for employees and contractors, which was wonderful. We’ve been together for seven years and play casuals around Los Angeles, primarily at the amazing nightclub known as The Edison.

An avowed “gear head”, I have everything I need to translate the music in my head to my fingers and amplifier: a lovely Paul Reed Smith Singlecut SE, a Fender Stratocaster, a Yamaha 12 String acoustic, a Yamaha electric bass, and a Martin D-28 acoustic six string that belongs to my wife. I like to refer to her Martin as “the dowry.” 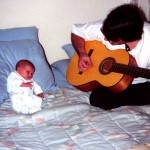 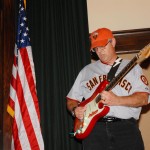 Performing the National Anthem at the Baseball Reliquary’s Hall of Fame ceremony in 2010. 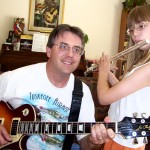 Jon and Katrina perform a duet between guitar and flute. 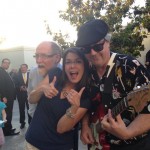 Enagaging the audience at a Los Angeles art gallery opening. 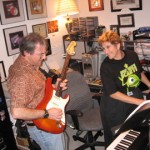 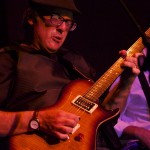 Playing a solo with the Bluez Express on stage at The Edison in downtown Los Angeles. 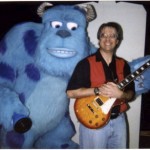 Hanging out with Sulley after performing. 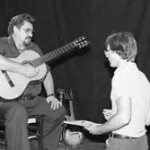 Working with the world’s most recorded guitarist, Tommy Tedesco.