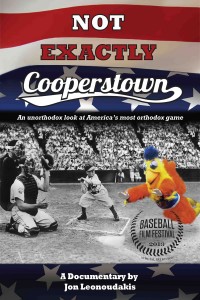 Not Exactly Cooperstown is an unorthodox look at America’s most orthodox game, and is the story of the Baseball Reliquary, a grassroots, non-profit, anti-establishment version of the National Baseball Hall of Fame in Cooperstown. It’s the only hall of fame that allows fans to vote for inductees, earning the title of “the People’s Hall of Fame”. I like to describe the NEC as, “quirky, funny, and poignant, the film is a bold stew of Americana, folklore, sex, religion, scandal, fandom, poetry, sport, and art”.

Since it’s release in 2012, it has become something of a cult favorite in the baseball sub-culture.