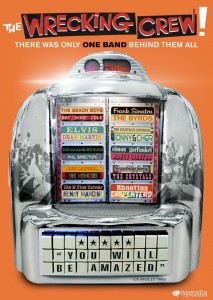 In the mid-90s, I was invited by film director Denny Tedesco to join his team as a producer to create a music documentary film entitled, “The Wrecking Crew.” The title referred to an elite group of Los Angeles studio musicians who were the backing band on more hit records than any other group in the history of the music business. Denny’s father, guitarist Tommy Tedesco, was one the crew, and he wanted to make the film when he learned his dad had terminal cancer.

The list of their hit records and artists was astounding: Elvis, Sinatra, Richie Valens, Sam Cooke, The Beach Boys, Jan & Dean, Dean Martin, Sammy Davis Jr., Gary Lewis & The Playboys, The Mamas & The Papas, The 5th Dimension, The Byrds, Herb Alpert & The Tijuana Brass, Sonny & Cher, Nancy Sinatra, Glen Campbell–the roll call resembled The Dead Sea Scrolls of 20th century popular music. Additionally, they were Phil Spector’s “Wall of Sound”. We came to understand that no other group had more hit records in the history of the music business. Not even The Beatles.

Since music is one of my passions, and the hit records they made was the soundtrack of my childhood, it was a perfect fit. My role was strictly creative, helping Denny determine which stories to tell, participating in interview shoots, and reviewing edits in the cutting room. One of the first things we did was construct a timeline from 1950 to 1970 to chart the progress of popular music, rock and roll, and US/World History in parallel. That enabled us to determine which stories to tell and explore.

In 2002, our 6th year of production, we injected a new storyline. We felt anyone could make a documentary about The Wrecking Crew, but no one could tell it from Denny’s perspective. Denny crafted a voice over that could tie the story together, and that the film is about his father and his extended family, The Wrecking Crew. This story line became the emotional center of the film.

In 2005, we were at a creative juncture, and I suggested we do a test screening with an audience, conduct a survey, evaluate the responses, then look for the trends of issues to address. The event and process drew upon my experience with interactive and attraction playtesting, and I created a simple form that would deliver data that would clarify where we needed to cut and add material. It worked like a charm.

We were in a race against time to finish the film, as these musicians were now in their 70s and 80s. Tommy Tedesco passed away in 1997, and four other members of The Wrecking Crew died between 1998 and 2008.

We used a lot of archival still and film clips from the era, to bring audiences back to a time and golden age of recording that was remarkable. The crew traveled around the country to gather interviews and it took 12 long years to complete this important cultural document. One of the benefits of time passing during production was the evolution of technology. We shot 16mm film from 1996-2001. I felt it would be more cost-effective and helpful to the process if we shot in pro DV-cam. Denny reluctantly agreed, but was thrilled when he did not have to change camera rolls every 11 minutes during interviews, but only once an hour.

The film hit the film festival market in 2007 and audiences were effusive in their praise for the film and it’s untold story. The larger issue of licensing over one hundred of the most popular songs of the 20th century was a daunting task we always knew would be part of the equation. It would take another ten years for the film to raise the money to pay for the licensing and find a distributor. Today, The Wrecking Crew is one of the hottest documentary titles on Netflix and iTunes and was recently voted one of the top 20 music documentaries of all time. 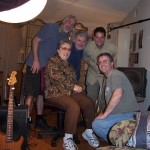 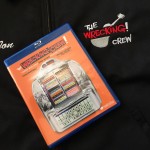 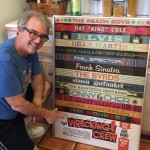 Wrecking crew director Denny Tedesco signed a thanks to Jon on the film’s poster. 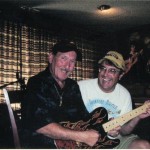