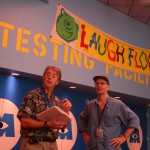 Jon and team check on the pre-show queue line area for the attraction. 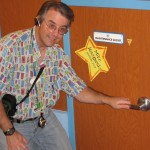 The show producer tends to his star’s dressing room. 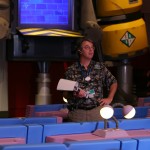 Jon confirms the big laugh canister is in working order for the show. 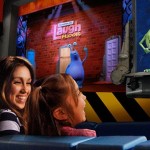 The Laugh Floor is a hit with audiences of all ages. 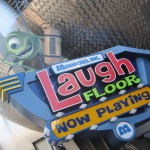 From Fall 2005 until Spring of 2008, I was one of the lead show producers to help create the next step in the “Living Character” attractions at Disney Theme Parks. These attractions allow the guests to interact with an animated character in real-time. “Turtle Talk with Crush” at EPCOT and Disney’s California Adventure became a smash hit with guests as soon as it opened. “Turtle Talk” featured one screen and one character in a theater that held about 150 guests.

Enter “Monsters Inc. Laugh Floor”, with 3 screens, and as many as 6 characters in a theater holding 400 guests. It was a complex show, using bleeding edge technology and heavy R&D throughout production. The show featured the mighty challenge of appealing to ages 5 to 95, and coming up with humor, which is very subjective, that would make the show entertaining for everyone.

The Laugh Floor’s conceit is that guests are invited into the Monster World, where earnest but fledgling Monster stand-up comedians try to get guests to laugh and fill a giant laugh canister to help power Monstropolis. Mike Wazowski is the amiable host, sweating through antagonistic commentary from Roz, his bureaucratic foil from the movie.

The guests are the real stars of the show. In the pre-show queue, they have the chance to text message a joke that may be told in the show by the Monsters. Inside the theater, guests may end up on one of the large video screens with amusing text under them, e.g. “needs a hug” or “is sitting on a tiny monster.”

Guests responses to the Monster comics, and the Monsters’ reaction to them makes every show different and the attraction repeatable. Guest reactions from Disboards Blog, Summer, 2008:

“We loved it. Thought it was just hilarious. We must have done it 4 times.”

“I think it’s hilarious….my whole family enjoyed it…no kids…all adults…age ranges from 18-50+ and we all liked it alot. They do pick out people in the audience to interact with and show on screen, so you never know what to expect.”

“We went twice last week. My 8 year old son loved it. My husband found it amusing as well. Just my luck, they put my face up on the screen and stuck a microphone in front of me, and I had to have a monster read my mind. My son really got a kick out of that!”

My Responsibilities covered participation in, and/or oversight and management of:

A word about designing and producing interactive experiences. It’s akin to a black art, and it requires a lot of testing, or play-testing, with audiences to create and shape the content of a show that will be seen by millions for years. The manner in which playtest data and information is extracted is a delicate process in and of itself. All interactive shows experience a measure of failure before they are final–it’s the nature of the beast. On a project this big, the pressure was enormous. The time and effort required to integrate script, technology, and the human element is significant.

It is now 2016, and, after nine years, the attraction remains one of the most popular in Magic Kingdom/Walt Disney World. The new characters we created with Pixar (who were amazing to work with) have become beloved and delight millions annually.