Jon and special guest Perry Barber celebrated women in the national pastime in style on March 10, 2019, at the San Francisco Public Library. Perry Barber has been umpiring for nearly 40 years and is a true baseball pioneer.

She’s umpired around the world and is a tireless advocate for women to participate in our national pastime. Before strapping on the umpire’s mask, Perry had a successful career as a singer-songwriter in NYC, opening for the likes of Bruce Springsteen, Billy Joel, and Hall & Oates.

Jon screened three films from “The Sweet Spot,” featuring stories of fandom and impacting the landscape of baseball in spite of crippling gender discrimination. The post-screening Q&A session with Jon and Perry got lively when Tom O’Doul, Lefty O’Doul’s cousin, asked her to demonstrate how she rings up called third strikes. In an instant, Tom, Perry, and attendee Charles Fracchia, Jr. assumed the position of batter, catcher, and umpire. As the third strike whizzed past Tom, Perry rang him up with a flourish!

Other baseball pioneers in attendance included Rachelle “Rocky” Henley, a member of the inaugural Colorado Silver Bullets Baseball Team (1994) and author/political scientist Jennifer Ring. Rocky (L) is pictured with Jon and Perry in the photo above.

The post-event party was held at the marvelous new baseball-themed restaurant, The Pine Tar Grill, which is festooned in San Francisco Giants artifacts, memorabilia, and equipment.

Jon presented a trio of films from “The Sweet Spot” catalog to honor Black History Month on February 10, 2019.

The local audience was treated to a PowerPoint presentation prior to the screening, which provided historical context for the event. It also honored the recent passing of former Bay Area resident Frank Robinson, one of the greatest to play the game, and the first African-American to manage a Major League baseball team.

The films covered stories about one of the last interviews Jackie Robinson gave before his passing in 1972 and a profile in courage of Jim “Mudcat” Grant, the first African-American to win 20 games in the American League.

Somehow, I experienced all of that (and more) in my long career as a producer in the entertainment industry. You can watch some of those highlights in my new demo reel covering over 20 years in just 2.5 minutes!

baseball work and “a love of the game.”

Clink link below to view!

Writer Charlie Vascellaro wrote this fine article about the “Shutout: The Battle American Women Wage to Play Baseball” screening at the Hall of Fame,

using the film as a means to explore the issue of gender discrimination in our national pastime.

Shutout! The Battle American Women Wage to Play Baseball has been selected for screening at

the 13th annual Baseball Film Festival on 9/22 at 7pm in the Bullpen Theater.

Shutout! explores the social, political, and cultural factors that led to the systematic exclusion of

American girls and women from the game, celebrates those who’ve succeeded in the face of such

challenges and considers the path forward to make baseball available to everyone.

Jon presented his latest academic paper, “Swing and Miss: How MLB Teams Fail Creating an Engaging Fan Experience and How to Fix It,” at both the NINE Spring Training Conference and the Cooperstown Symposium on Baseball and American Culture. He recently presented it to the Los Angeles Dodgers’ executive management as well! 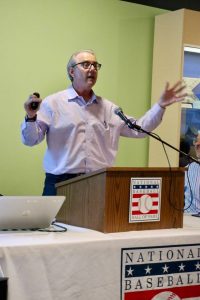 Jon recently produced and directed a promo piece for Season Four of “The Sweet Spot” on Amazon Prime and Vimeo On Demand: “Baseball: A Special Kind of Magic.”It features a collection of short stories: “Lefty” O’Doul & the Case of the Missing Left Arm, Baseball’s Unknown Iron Men, the hazards of catching, and a life saved at the intersection o baseball and religion.

Jon did a book signing at the National Baseball Hall of Fame during their annual symposium on Baseball and American Culture in March. The book is a companion to his baseball series on Amazon Prime and is the first of several volumes to be released on Amazon.com. 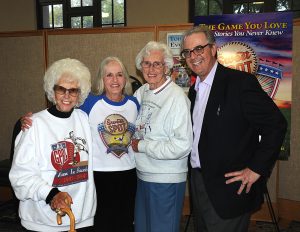 Jon will be presenting two days of  baseball documentaries from his groundbreaking TV show on Amazon Prime, “The Sweet Spot.” He’ll screen his film on gender bias in baseball, “Shutout! The Battle American Women Wage to Play Baseball” (8/25) and stories about race in baseball, featuring episodes with Jim “Mudcat” Grant and Jackie Robinson (8/26). Jon will also be doing book signings both days for his new book, “Baseball Pioneers.” 1:00 p.m. start both days. Free and open to the public! 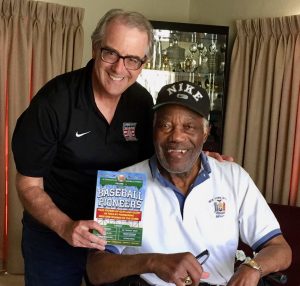 Jon with former Cleveland Indians pitcher Jim “Mudcat” Grant, the first African-American to win 20 games in the American League. Mudcat appears in Jon’s new book, “Baseball Pioneers,” as well as three episodes of his series on Amazon Prime and Vimeo on Demand, “The Sweet Spot.”